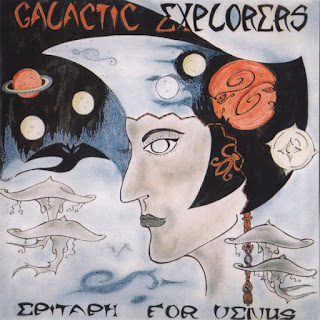 Epitaph for Venus is apparently the sole mysterious album recorded by a cosmic electronic krautrock trio Galactic Explorers around 1974 (some sources say 1972/3). The album remained unreleased until 1996 when the first CD edition came out in U.K. This pressing is already rare and expensive so this new reissue from the original master tapes was in order. Only on CD, though, which is a shame since this is really good stuff.

The album includes just three long, experimental and very trippy instrumental tracks. The overall vibe is rather minimal but not quite. You can hear at least Mini Moog and other synths, Hammond and other electric organs, Fender Rhodes as well as some percussion. And effects, lots of effects! This was probably ambient before anyone came out with the term. It's all really chilled-out, atmospheric and floating. You are taken on a journey to inner and/or outer space for sure. Just close you eyes and take this weird, blissful music take you away. I can hear some early Tangerine Dream in here but this is actually more enjoyable and a bit easier to digest. For fans of Terry Riley, Cluster, Popol Vuh and Cozmic Corridors.