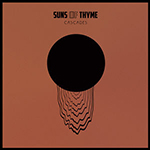 "Krautgaze" band Suns of Thyme from Berlin have released their second LP earlier this year, so I'm a bit late again. I liked several songs on their 2013 debut Fortune, Shelter, Love and Cure (especially the hypnotic "Soma (God For Gods)" and "Asato Maa", check them out!), but some tracks just were a bit too mainstream for me and not really interesting. Cascades has the same problem, it's partly some sort of psychedelic rock, but then they sound more like U2, Depeche Mode or The Cure or something, that also goes for the vocals. Never that bad, I must admit, but just not very mind-blowing or exciting for me. Also the guitar sound is too much the same with lots of stereo chorus of something all the time. They do get a bit experimental for example on the short, peaceful instrumental "To Vanish" and Oriental & mystical on another one called "The Field" and have some great melodies and stuff, but this album just doesn't do it for me, sorry guys.