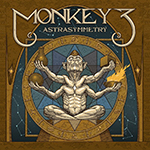 Monkey 3 from Switzerland have been amazing heavy stoner rock fans with their psychedelic, instrumental and spiritual music for fifteen years now and they have quite a big following especially in Europe. They have played most of the European heavy stoner rock/ metal festivals along the years, and really are a great experience live.

Astra Symmetry, the band's latest album will see the light of day tomorrow, so I'm just about in time with my review for once... Sorry, I don't really have any time to write here anymore! The CD and 2LP will include 12 tracks that are rather varied. We have the heavy, metallic riffs and very talented guitar solos, beautiful, post-rock like keyboards and synths, very nice, melancholic melodies, modern progressive vibes, and what's probably the most important aspect, the hypnotic, trance-inducing elements. Most of the tracks are rather slow and meditative, like the wonderful "Crossroad" that also has some cool, soft vocals that fit in very well. There are also a bit stronger vocals for example on the heavy and doomy "Dead Planet's Eyes" making the band sound even a bit like later Candlemass, although with Mellotron sounds... This is a very emotional, sad and beautiful album, although powerful and cosmic as well. I prefer the hypnotic, cosmic and trance-inducing stuff that takes you someplace strange and mysterious when you close your eyes and let it go. There are lots of those moments in there! Some faster tracks like "Seeds" also rock out more. "Astrae" is just a rather short spacey ambient piece, but it also has its place on the album that is really well constructed as a whole. One of my favourites is the very Eastern/Oriental sounding "Abyss" that gets pretty heavy and also has vocals, really deep stuff. Prepare yourself for an astral journey and just put this great album on, you won't regret it!