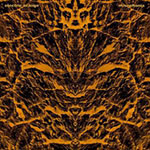 After the electrifying party music 10" Nein! HITS à Gogo - Golden Recordings the German hypnotic krautrock masters Electric Orange return to their extended instrumental, spacey and psychedelic mind excursions on their new 2LP Misophonia. It's their 11th album! I'm glad they have found home at Adansonia Records since you know you will always get high quality products with this label, and also highly limited die-hard editions with all kinds of gimmicks which is important for us collectors. This time the most limited 2LP version, the clear vinyl limited to 100 copies, comes with slipmat.

The album starts off with the long (18:09), peaceful, droney and dreamy "Organized Suffering" that takes you to other worlds immediately. Another long mind-journey "Bottledrone" is even more laid-back and ethereal, and very enjoyable as well. At "only" under eight minutes in length, "Demented" is a bit more percussive but still rather floating stuff. The title track "Misophonia" is divided into three parts that are scattered on the second LP, and is probably the most hallucinogenic stuff on the album. "Misophonia I" starts off in a dark, very ambient way, but a hypnotic rhythm is added in the middle. Shorter (4:40) "Shattered" has some jazzy moods and cool rhythms but still stays rather minimal. "Misophonia II" is just a short, weird interlude that takes us into "Opsis", a very mystical and mesmerizing piece that I like very much. The best part of the album still is the last track "Misophonia III". This 17:36-long trip has some heavier guitar as well and is very psychedelic and have the ability to transport the listener into some very strange planes of existence. It has lots of weird, spacey sounds and again that hypnotic beat. This works marvelously especially with headphones and eyes closed, try it! I'm in trance. Another killer album by Electric Orange, what else can I say? Also available on CD from the band's Bandcamp site.