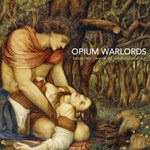 This is the third album by Sami Albert Hynninen’s (Reverend Bizarre, The Puritan, Orne, Tähtiportti etc. etc.) experimental and esoteric doom/drone/sludge band Opium Warlords. It might be a little easier to digest than Live at Colonia Dignidad or We Meditate Under the Pussy in the Sky but definitely not Easy Listening stuff… But much more accessible and not nearly as avant-garde as Sami’s other project March 15. On this album Sami is accompanied by Laura Länsimäki and Erkki Virta, and this sure is pure, raw, deep and heavy shit.

The album starts off with the slow instrumental “The Sadness of Vultures” that just has some sparse, low-tuned, distorted bass and a little bit of experimental noise in the background. The mood is extremely gloomy right from the beginning and it won’t get any lighter I promise… “The Land Beyond the Pole” is a bit more song-oriented piece since it has a slow (programmed?) drum beat as well. The 12:13-long “The Self-Made Man” is very doomy and desolate and has great, melodic but strong vocals by Mr. Hynninen. This is probably the song that sounds most like Reverend Bizarre and it’s also my favourite on the album. Slow, powerful, dark and heavy stuff! It even has a guitar solos and starts to rock out more later on. Epic doom metal! “The God in Ruins” is musically a gentler, peaceful track, although the vocals are very raw, harsh and bare and extremely sad and gloomy. Another long one at 9:42. Then it’s time for “The Solar Burial” that has emotional bass playing and low-pitched, mantra-like vocals and later on also some guitar and cymbals. It gets really heavy around the five-minute-marker, so beware… The longest piece on the album is the excellent “Mount Meru” and it’s an epic, slow and heavy doom metal track that only Albert can conjure up from the abyss. The faster part in the middle meven sort of reminds me of Witchfinder General, brilliant! Another highlight for sure. Next we get to chill out for a while during the pastoral beginning of “This Place Has Been Passed”, but after three minutes things get heavy and disturbing again… “Manisolas from Misandria” is a great, shorter doom metal instrumental with some experimental sounds as well. “In Melencholy Moonless Acheron” Sami delivers some spoken-word like as well as melodic vocals and I love it. This is a rather minimal and emotional song and a great way to end the album. Taste My Sword of Understanding is available on vinyl and CD and highly recommended for all the fans of Sami Albert Hynninen and heavy, doomy music in general!