Beyond-O-Matic: Revelations at the Borders Between 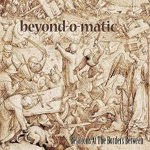 Beyond-O-Matic is an Austin, Texas based “improvisationally birthed, bombastically enhanced, emotionally charged space-prog stadium rock” band formed in 1995. This CD released last year is their first CD since 2010 and includes first new recordings since 2002, so it’s a sort of reform thing I guess. The main theme on the album are the different phases between live and death including human relations and altered states of consciousness. Phew, pretty deep stuff!

The CD begins with a 80s Pink Floyd/Peter Gabriel styled “In the C”. “Tick Tock Rock” is a shorter, more experimental and minimal track, and "Wish" a full-blown, long and slow mind-journey with some more Pink Floyd vibe but heavier guitar. The great, high-pitched vocals are a mix between Phil Collins and Ian Gillan. Before the ten-minute-marker the track gets instrumental, livelier and more progressive. I like it! On another long (12:56) and slow track “In Two Os” the singer sounds even more like Ian Gillan on Born Again and I’m not complaining. Even the track has some dark Black Sabbath vibes although it’s more psychedelic. “Turn, Switch, Trust” starts off peacefully with some airy synth stuff and this is slow, tranquil, dreamy, melancholic and beautiful piece. Fans of early Porcupine Tree or the like will love this. “But the Love” is another slow, dreamy, heady and spacey song that also has some flute and melodica. Very deep, hypnotic and evocative stuff. The longest (15:52) track “Out the C” ends the CD in even deeper and more emotional mode, although the track speeds up at some point before fading out softly in the end. Worth checking out if you are not afraid of some heavy, deep issues and emotions!