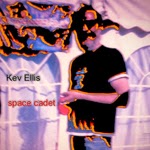 Kev Ellis used to be the singer and harmonica player of a late 80s / early 90s UK psych blues/festival band Dr. Brown that also featured the late Huw Lloyd-Langton (Hawkwind) on their last EP release. Since then Kev has been active in various kinds of music styles like blues, dub, ambient, electronic and space rock. Space Cadet is his first solo album since only now had the technology advanced enough so that he could record the music he heard in his mind by himself. The drums have been programmed, but still sound pretty good. This is a limited edition of just 100 CD copies and already sold-out so the album is now only available as a download.

The first song “Guiding Light” is the only one to feature another musician: Grunty Macnaughton plays some guitar on it. It’s a long, hypnotic and atmospheric mid-tempo space trip with heavy guitar, lots of synths and some Kev’s trade mark blues harmonica thrown in for good measure. The bit lighter and more melodic “Celebrate the Day” reminds me of late 70s Hawkwind or Hawklords and I just love the vibe. There’s also some flute on this one. “Resting Heart” has a mellow, earthly dub mood including bird-song and nice synth melodies. At under two-minutes, “Super Cosmic Space Age Baby” is the shortest track on the CD and rocks out in a punk/post-punk/New Wave style. The harmonica gives its own special bonus kick. “Emerald Eye” is a melancholic, beautiful piece with some cosmic sound effects. Then it’s time for some heavy space boogie with “Sunrise Pagan Bop”. Excellent stuff! Looking through my mind’s eye I can clearly see this been played live at the Stonehenge Free Festival during Summer Solstice… The mellow and airy instrumental “Time Reflection” is more ambient in nature including acoustic guitar, keyboards and synths. The groovy space rock number “Ancient Flight” is one of my favourites, very addictive and catchy. The album ends with the long and glorious “Morning Raga” that has elements of Gong, ambient electronica and Indian music. A very nice way to finish this marvelous album! Kev’s singing is still just perfect, and he has done a great job in all aspects.