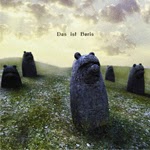 Evil Bear Boris is a new Russian band featuring several same members as post rock group I Will Kill Chita. The music is quite different, though, but still mostly instrumental for some reason. I don’t really know how to describe their music, but it’s some kind of rock music with quite a lot of energy and also strings and horns. They use terms as bearcore or symphopunk on their Bandcamp site… But this is not really that dangerous or hard core, more like easy listening. This EP includes three tracks. “Fight Club” sounds sort of like 80s detective series soundtracks (especially the keyboards and horns), but there’s a bit heavier guitar buried in the mix as well. “Evil Bear Boris” has some of the same vibe, but this is a bit funkier and more progressive affair and I also get some video game vibes. Think of Kiveskives from Finland. It also has some weird/funny vocals, but I’m not really that amused. The last track “Geheimnisse Des Dritten Reichs” is much more serious and darker music and closer to their mother band IWKC. This is closer to my mind-set, I guess. Not bad, actually.