Sendelica: The Fabled Voyages of the Sendelicans 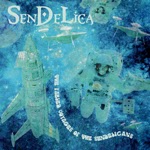 Welsh instrumental psych rockers Sendelica will soon release their first compilation album on limited vinyl and CD. The Fabled Voyages of the Sendelicans includes six tracks originally released on the band’s four first albums 2007-2011. All the tracks will be out on vinyl for the first time! I’ve been a fan since their official debut Spaceman Bubblegum and Other Weird Tales from The Mercury Mind was released on Russian R.A.I.G. label in 2007 and been following them closely ever since. The band never disappoints and a well-thought “best off” album was definitely a good move at this point in the career.

“Standing on the Edge” from The Girl from the Future Who Lit Up the Sky with Golden Worlds (yes, they do always have long album titles!) starts off the album. After the heavenly voices in the beginning we get some slow, heavy riffing. This is the shortest track at 3:32 and also played live rather often. From the same album we also get the long “Manhole of the Universe” where guitarist Peter Ingham gets to play lots of excellent solos. There are for example some hallucinatory speech samples and electronics included to increase the trippy factor and it sure works! Nice jamming on this one. “Zhyly Byly” is my favourite track from The Pavillion of Magic and Trials of The Seven Surviving Elohim, the first CD on their own Frg Records. This is mysterious, deep, psychedelic and trance-inducing stuff with some dub and electronic elements thrown in for good measure. The end is close to Hawkwind styled space rock which is always a good thing in my books! Then it’s time for something extremely beautiful and atmospheric: “Screaming and Streaming into the Starlit Nite” is definitely inspired by “Maggot Brain” that the band has also covered on their Fruits de Mer 7”. This track has totally awesome saxophone by Lee Relfe and spacey synths and electronics by Colin Consterdine and just keeps on growing and expanding. Amazing! From the same Streamedelica, She Sighed as She Hit Rewind on The Dream Mangler Remote album we also get the celestial and tranquil “Carningli (Hill of Angels)” that proves that Sendelica can create brilliant, dreamy ambient soundscapes as well. Nik Turner is playing flute on this one! The last track “Spaceman Bubblegum” is the only one lifted from the band’s debut and is a good and heavy choice with some nice jamming by the guys. The mega limited CD/vinyl box full of space goodies is already sold out on pre-order but you can still get black or blue vinyl and of course the CD version on the band’s own label. This is a great collection and comes warmly recommended. The band will start their next tour in April at the Crabstock – Fruits de Mer Festival of Psychedelia in Wales and also play at the Finnish version of the festival, Crabstock on Ice, on May the 3rd at Club Darkside in Helsinki. Go and see them live if you can!