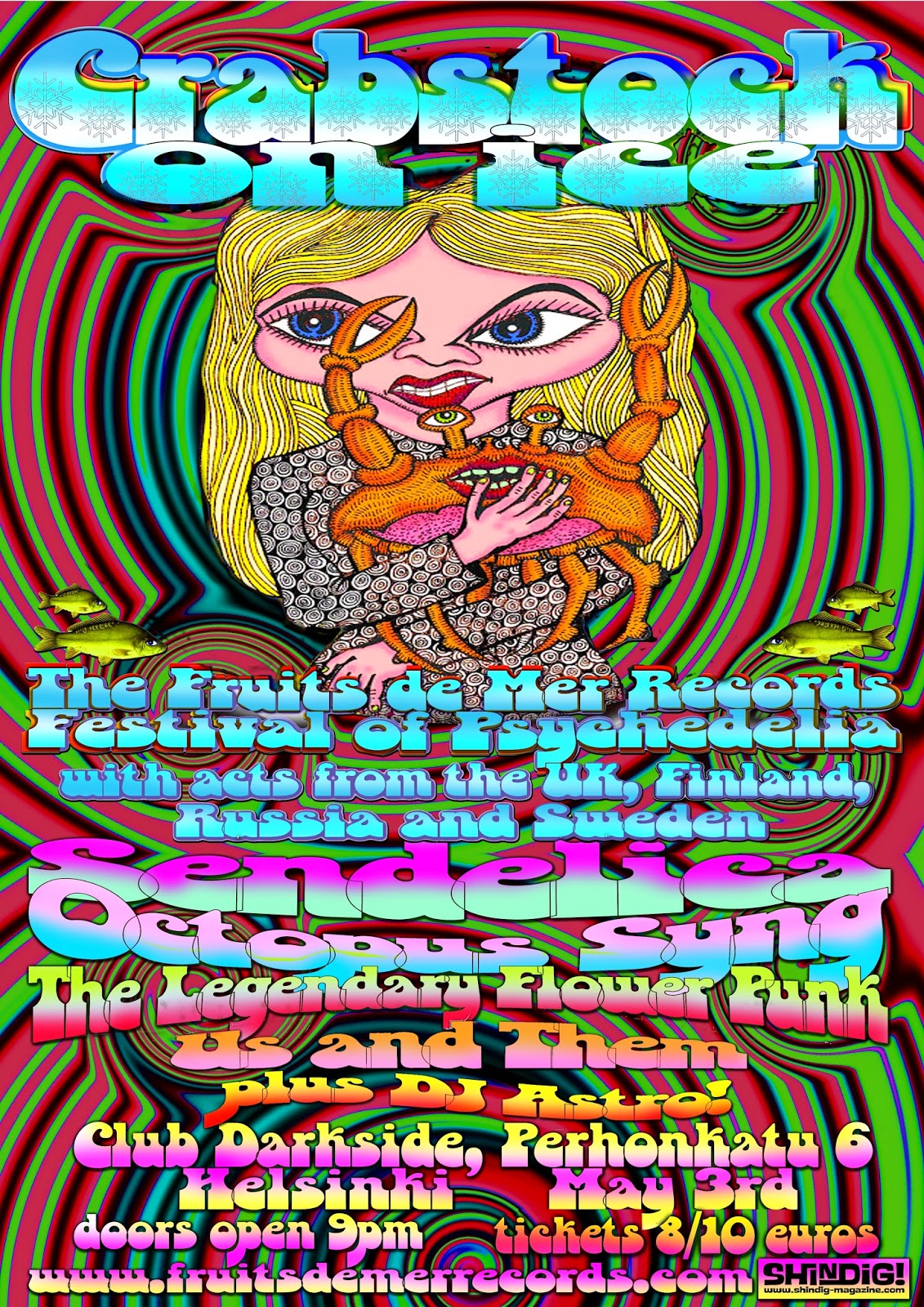 After the success of Fruits de Mer’s first live event – the 2013 summer Fruits de Mer All-dayer at London’s Borderline, FdM seeks out the Finnish connection with hours and hours of psychedelic music at Helsinkis warm and cozy Club Darkside.

Early-bird (/fish) tickets are just £7/8Euros and that includes a FDM GOODIE BAG to the first 100 people through the door (received on entry to venue) including an exclusive FdM 'Crabstock On Ice' and a Fdm May release preview CD.
(a copy of FdM’s Borderline free CD sold recently on ebay for £70, while a complete Borderline goodie bag sold for over £125). The tickets at the door (if any left) will be 10€.

Sendelica - they are Fruits de Mer regulars, featuring on many releases – from their stunning version of The Velvet Underground’s ‘Venus In Furs’ to a sidelong track on FdM’s recent ‘strangefish’ series of albums.
PROG magazine rated their new album #2 in their top 20 albums of 2013 and also featured in US Goldmine Magazine top albums of 2013 and Greeces Timemazines top 20 list.

Octopus Syng - started out as a one-man psych rock/folk/pop act of Jaire Pätäri but has since grown into a full live band. They have so far contributed to two Fruits de Mer releases: Keep of the Grass LP and Regal Crabomophone Annual for 2014 7". Look out for their third full-lenght album Reverberating Garden Number 7 to be released on Mega Dodo (UK) this Spring.

Us and Them - Swedish duo Anders and Britt are releasing their second single on Fruits de Mer in March. Beautiful, simple acid-folk, their website is usthem.wordpress.com - there are some great reviews there.

The Legendary Flower Punk - will appear on the festival as psychedelic space rock duo featuring two members of The Grand Astoria (the band related to Fruits De Mer via numerous compilations). Another great news is that "Crabstock on Ice" will also be an official release day of the new album called "The Great Acid Folk Swindle"!!! CDs will be available for purchase in the club.

+DJ Astro will be spinning loads of rare FDM tracks between the acts......

PLEASE NOTE: TICKETS WILL ONLY BE AVAILABLE BY MAIL ORDER UNTIL 14TH APRIL