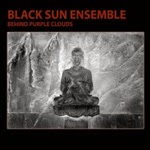 I have difficulties listening to this CD without a certain amount of sadness. This is the last studio album by Tucson, Arizona based psychedelic explorers Black Sun Ensemble (1985-2013). The band leader, legendary and very unique guitarist Jesus Acedo died of heart attack in the middle of the recording sessions on March 4, 2013. He was only 50 years old and left this world much too young. He had a troubled life struggling with his inner demons but he gave us so much wonderful, otherworldly manifestations through his magical music. He had just got his life somewhat back on track in 2012 after several more years of distress and the band started to make some music again. He definitely is and will always be one of my biggest heroes. Behind Purple Clouds is the first BSE album since 2008’s Across the Sea of Id: The Way to Eden.

The 58-minute, fully instrumental CD has 13 tracks. “Black Temple”, the opener, starts off peacefully with some melancholic keyboards that are soon joined by mysterious guitars, violin, flute, bass and percussion etc. The hypnotic and more up-beat “Mandala” wakes you up from the druggy slumber and has quite a lot of power. Great! On “Egyptian Magician” things get a bit electronic with some modern sounding dance beats and psychedelic space sounds. The longest (6:55) track on the album is “Valley of the Kings” where you can hear the mysteries of Ancient Egypt to take form. Acedo does not play on this track but the oud played by Michael Henderson gives a very Jesus-like vibe. Great bass playing by Eric Johnson too! ”Blue Thunder” is a beautiful, melancholic piece with great atmospheres. Acedo is credited as one of the writers but is not playing on this one either. A classic, heavy and dark BSE track “Captain Wormwood” sees a nice, new and shorter interpretation and this was also released on a 7” split single that I still need to track down. the more acoustic and percussive “Bastet” (without Jesus) is a return to the Egyptian moods and “Lotus” is a very pleasant, simple little dream world. Acedo is back in business on at first mellow and moody track called “Watch the Stars” that gets more intense after one minute. “Jasmine” is an acoustic, hypnotic very Arabic sounding piece written by oud player Al Perry. We get some heavier electric guitar rock on Acedo’s “Apollo Wolf” that reminds me of the 80s BSE stuff. “Red Temple” has an almost dub reggae kind of vibe that’s unusual for the band but it still works great and has some powerful organ and guitar. The album is finished with the most beautiful, tranquil and blissful title track “Behind Purple Clouds” that just has Jesus Acedon on guitar, Eric Johnson on organ and Bridget Keating on violin but that surely is enough. What a wonderful end to this amazing CD that is a great and welcome addition to the legacy of Black Sun Ensemble. The band is no more but the legend lives on and luckily there is still a change to hear some more unreleased bits and pieces in the future. “Jesus Angel De Paz Acedo – may you walk in light, love, wisdom and beauty – forever”.