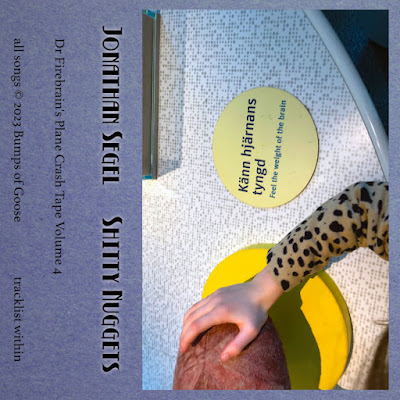 Jonathan Segel is an American multi-instrumentalist now living in Sweden. I think people know him foremost for playing with Camper Van Beethoven and Eugene Chadbourne and his own band Hieronymus Firebrain, but he has been active also for example with Swedish band Sista Mej and playing gigs and doing studio sessions with Øresund Space Collective. Lately he has consentrated mostly on his solo stuff, not to forget his numerous contributions to around a dozen Astral Magic albums... I have previously reviewed his 2020 album Outside Inside. That one also included some electronic and experimental tracks, but Shitty Nuggets is more singer-songwriter oriented.

The album has 26 pretty simple and straight forward songs. Sometimes they feel more like demos, although the sound is great. Jonathan is also a great singer. Sometimes he reminds me a bit of Bowie, but not too often. Most of the music is rock or pop, but there are also some folky pieces like the pretty "Every Little Thing". There's enough psychedelic elements and experimentation to keep the freaks interested, as well. "In the Backroom" has some cool funk/disco vibe. I can also sense some Grateful Dead from time to time. "Ruth and Rhonda" has a ska beat. There is something very 80s on the synth & reverb department. Jonathan plays and sings everything very fluently by himself, but there are also a few guests mostly on vocals. This album has some similarities to Anton Barbeau's latest albums, I think. Pretty simple but great little tracks with some cool tricks and hooks to keep the listener instrested. Also good top hear Jonathan play some mean guitar solos like on the excellent and trippy "Waiting for the End Time", maybe my favourite. I also really enjoy the last, tragic ballad "World of Trouble", for example, but there are loyt of great songs in there for sure.

The official release date is January the 6th, so only some of the songs are playeble at Bandcamp at the moment. You can already pre-order the digital album, but there will also be a limited tape release soon.