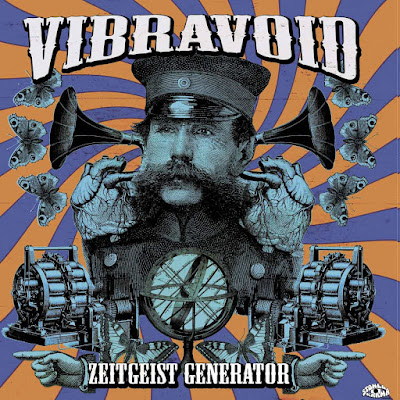 Oh yes, the wait is now almost over: the new Vibravoid 2LP / CD will finally be released on the first of March 2022! problems with the vinyl pressing delayed the album for a year or so, which is sadly of course quite common nowadays. What we have here is for sure the band's best studio album ever including 15 new, original compositions. This time most of the tracks are in the "normal" 3-to-6-minute duration which I think is a good thing. Mastermind Dr. Koch has included only one 16 minute mind-excursion, the more electronically charged "A Taste Like Sugar" that you can already check out in edited form on YouTube. Sweet!

In general, the songs are as groovy, catchy, psychedelic and punchy as possible without loosing the plot and the interest of the listener. As always, we've got plenty of 60s oriented fuzz/tremolo/delay guitar, organ, drums, bass, hypnotic vocals, tons of spacey effects, sitar, you name it. All in all, a perfect mix of 60s psych/garage rock with krautrock vibe and modern production values. It is impossible to pick out any favourites, since the first time you put the album on you are totally hooked until the end with the seducing, mesmerising, trippy and mind-expanding beats and sounds. I have a feeling that this might be a bit more radio-friendly album too, but maybe I'm just a bit too biased. I got to admit that I have each and every release the band has put out since 2001 in at least one format, usually more... I just love Vibravoid! I'm so happy and proud that Koch has also recorded great guitars for five of my Astral Magic songs. You can already hear one of them, "Sixth Sense" on the Flipside Freaks: Red compilation LP/CD on Flicknife Records, and the rest will be available on the 60s psych rock oriented Am I Dreaming? LP mastered by Dr. Koch as soon as someone has the wits to release it. Anyway, you can now pre-order several different 2LP versions (priced from 39.90 to 130€) as well as the CD and digital version of Zeitgeist Generator from the Stoned Karma Records Bandcamp site and that's what you really should do!