The Fisheads - Pleasant Valley Sunday/ Let's Get Together 7" + CD 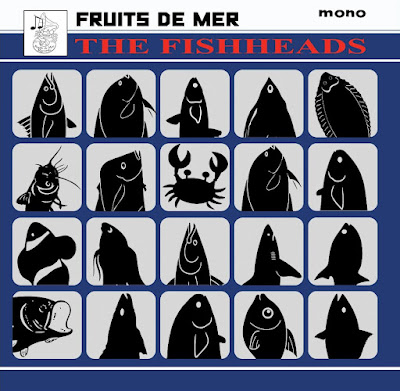 This is the last FdM release in 2021 and should be out just before Christmas. It is a sort of return to the roots of the label since it includes two 60s classics. So who are The Fisheads, you might ask? It's a sort of Fruits de Mer super band, we could say. Put together by Astralasia's Swordfish the musicians include Anton Barbeau, Crystal Jackqueline, Icarus Peel etc. The single does not sound like Astralasia at all, it's pure blissful 60s psych pop/rock. The bonus CD will probably include more trance-inducing mixes by Swordfish, I presume, but it was not included in the promo package so I can't say for sure.

Okay, what about the 7" tracks? "Pleasant Valley Sunday" is a nice The Monkees song and I just love this version! Nothing too psychy or trippy, just good vibes and lots of positive energy. On the B side we've got another 60s anthem "Lets' Get Together" (Chet Powers). This version is a lot faster than the original The Yougblood folk rock version that you might have heard on numerous 60s compilations but also excellent. The message from the Summer of Love is more needed now than ever... The track has also been recorded by Jefferson Airplane among others but has not worn out in any way. Anyway, it works really well as a fast psych pop piece as well. Astralasia has also been pre-selling a special version of this release but they seem to be sold out, and FdM will only be selling that version to the UK customers, but this standard 7" + CD is available to EU citizens etc. for example from Shiny Beast. HIGHly recommended!