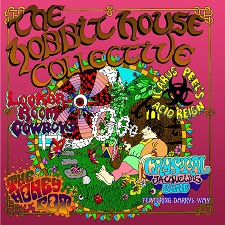 Crystal Jacqueline, The Honey Pot, Icarus Peel's Acid Reign and The Locker Room Cowboys are together known as The Hobbit House Collective. Of course these acts also share members so the borders were dissolving already, anyway... All of them offer one track for this very cool double single. You just can't go wrong with some of Fruits de Mer's best artists, and I'm sure most if not all the fans wil anjoy these pieces!

This is the first time that Led Zeppelin gets covered on Fruits de Mer, if I remember correctly. Crystal Jacqueline's version of the mighty "Battle of Evermore" is definitely my favourite on the single, just wonderful! Curved Air fans must be interested to know that Darryl Way is playing some great violin on it too. Over seven minutes splendidly spent. The Honey Pot then does another Zep classic "Ramble On" and it is pure magic. Then it's time for an instrumental: a rocking version of Fleetwood Mac's "The Chain" by Icarus Peel's Acid Reign. The single is finished with the only original tune, another instrumental called "Wolfgang Does The Nurburgring". This is funky stuff with lots of guitar soloing and some cool organ etc. You can preorder this very cool double single now and it will be released at the end of the month.