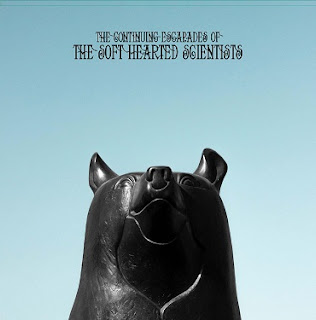 The Welsh psychedelicists The Soft Hearted Scientists are one of the best  I've become to know through Fruits de Mer label and I am forever grateful for that. Their What Ever Happened To The Soft Hearted Scientists 2LP + 7" compilation put out in 2013 opened a lot of doors in my mind. I realised that simple, whimsical, melodic pop/folk songs could be very psychedelic and mind-expanding, even if they were not done by Syd Barrett... I have been following the band ever since as well as Nathan Hall And The Sinister Locals, another project by the singer.

Some of the band's early CDs have been luckily reissued on vinyl lately which has been cool, but the latest albums are still only out on CD. Now it's finally possible to hear also some of the greatests tracks from The Slow Cyclone (2014) and Golden Omens (2016) from a big, nice vinyl disc! There are 19 songs on the first two LP's all together. In addition to a bit older tracks (alsa a couple from
2013's False Lights, for example, a well as the long "Westward Leading" from 20011's Wondermoon, check out the video) the first double LP is finished with the extended version of their 2019 single "Please Read Me". Wonderful!

But that of course wasn't all this package features. Now a sort of FdM trusted man and house remix guy Swordfish (Astralasia) has conjured up two albums full of his vision of what the music of The Soft Hearted Scientists could be in an instrumental, innovative remix form! "Astral Adventure 1, 2, 3 and 4" are all one-side long-sound collages that really expose the greatness of this music in another light. No ambient/techno beats were added this time, though, just some sound effects in between the pieces when needed. A very welcome bonus for this great compilation, I must say! I'm really digging this one as a whole.