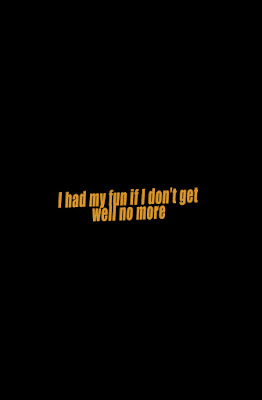 Golden Lampreys was an "electric acid blues hoodoo from the northern delta", meaning a band from Pori, Finland. This is their second (and sadly last...) release following the debut 12" Just Because You Did It Doesn't Mean You're Guilty" a couple of years ago. You can check my review here for some background info. The four songs on this limited (75 copies only!) tape release are the last recordings the band ever put together so there is even more sadness and despair in the air somehow.

The opener, "Sail on, Little Girl" is perhaps the closest one to have some appeal to Astral Zone Blog readers. I think I can hear some Spacemen 3 in there and the hypnotic, heavy guitar riff evokes some primal early Circle vibes in me. Although this is the fastest track on the tape it's still rather slow and dark. I actually like this a lot! "Louie, Louie" is not the popular song you maybe thought it was but a slow, rather minimal dark wave / Gothic styled and very depressive track. "Boogie" might not be what is usually meant with the expression either... But it still has something in common with the original boogie and blues, that melancholic "my baby left me" vibe but transformed into this millenia and in a more lysergic, electronic mode. Things get very mesmerising by the end, I like the synths on this one. Cool! "Spellbound Heart" ends the EP with some dark vocals that bring to mind Johnny Cash at times. I again enjoy the synths as well. All in all this is an enjoyable, although utterly depressing little tape that works very well as a funeral release to this odd, short-lived project.