The Cult of Dom Keller: The Second Bardo 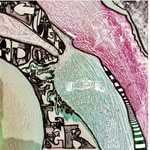 The Cult of Dom Keller is a psych rock band from Nottingham, UK. Since their inception in 2008 the band has released four EP’s, one limited CD and two full-length LP’s. The band has been compared to The Black Angels, Brian Jonestown Massacre, Spacemen 3, 13th Floor Elevators, The Warlocks, The Stooges and Hawkwind, to give you some kind of picture of their fuzzed-out, droney, hypnotic and mind-melting brand of psychedelic rock. I now have their both LP releases and have been enjoying them very much even though the sound quality is a bit on the raw and primitive side. But it’s just part of their fuzzy charm!

The new album has nine tracks ranging in length from 2:36 to 8:34 minutes. The longest track “Plague of All” comes first and it’s a pounding, fuzzy and repetitive caveman-psych thing. The instrumental “The Snake Keeps Changing” is a little shorter but it’s even more hypnotic stuff with heavy guitars, simple but effective beats and organ. The Same riff goes on for seven minutes and melts your brain… “Dead Seas” is the shortest track and has a bit of psych blues vibe. “Into the Sky Volcano – Beyond Burning Skies” is a more atmospheric piece with some sound manipulation, although it starts to rock after the beginning. “Heavy and Dead” has a hazy, dreamy mood but it gets more intense and driving soon. Very good stuff. Perhaps my favourite track still is the amazing, hypnotic and druggy “Godshaker” that brings to mind White Manna and Carlton Melton from the US. “Ghost Bones”, like some of the other tracks too, sounds a bit like Dead Skeletons. The title track “The Second Bardo” is somewhere in between 13th Floor Elevators and The Black Angels and rocks pretty hard and fast without vocals. The last rack “Killer in My Sleep” is a slower, moody one with some Brian Jonestown Massacre/Spacemen 3 vibes. What a great album, and I’m really looking forward to see the band live for the first time at the Roadburn Festival this week!