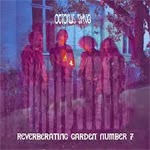 Reverberating Garden Number 7 really has been a real Isaac’s Cathedral to construct for Jaire Pätäri, the leader and singer/guitarist/multi-instrumentalist of Finnish psych rock/folk wonder Octopus Syng. Jaire has been building the album since his last album Birds of Morning Are Never Late released on Nasoni Records in 2007. After a couple of false starts, several hard drive crashes, search for a new record label and lots of bad karma in general the finished album is finally here! And it sure was worth the wait. A lot has changed since the previous album. Unlike before, also most of the studio recordings feature a full line up instead of just Jaire with occasional quests. The line-up of Octopus Syng has also been stable for a few years now featuring just Jaire, Jukka, his trusted drummer since the Dildo Mania times, guitarist/backing vocalist Joni who also plays in Black Lizard and bass player/backing vocalist Antti. Some years before the live line-up also featured female singer/organ player, but now we only have some guest female vocals on some of the studio tracks and Jaire also plays the organ, piano etc. on studio tracks. Everything has now been recorded at the band’s rehearsal place or Jaire’s home instead of a studio. This has of course given much more time to experiment with different recording techniques and microphones as well as mixing. The end result is amazing compared to the first version of the album a few years ago or even the promotional version that was pressed on CD-R last year. Since that, Jaire has done some serious re-recording, remixing and even replaced some songs. The professional mastering also helped, for sure…

Okay, so what about the music? We still have the whimsical and melodic Syd Barrett/Pink Floyd pop vibes, psych folk a la Pekka Streng and Captain Beefheart-like weirdness but also lots more. Jaire’s recent interest in avant-garde and experimental music also shows, for example on the weird opener “Avant-garden”. The ending of the song has more normal and very nice mellow melodies, though. One of my favourite songs is the next piece “It’s Not a Coincidence” that has a driving, alluring beat and hypnotic vocal harmonies also featuring female vocals. There’s also a slower, atmospheric part in the middle. Excellent stuff! The rather short (2:29), dreamy and quite minimal “In the Middle of Nowhere” reminds me of Spacemen 3 and the psychedelic, melodic and pretty waltz of “Diamonds and Emeralds” is very nice as well. “Very Strange Trip” includes some sitar and has a bit of Velvet Underground feel to it but also some 60s UK vibes. “Cuckoo Clock Mystery” is one of the oldest songs on the album and has gone though some very different phases. This very catchy tune is definitely one of the high-lights and also available as a video on YouTube but with an older mix of the audio. This one also has wonderful female backing vocals. A master-piece! “You Are Every Poem” is a beautiful, simple, folky ballad that also has some piano. The Captain Beefheart influences are the clearest on “Thought Collector” but the vocals are more like Syd Barret. “Mirror of Memories” is a mellower, soft, melancholic and very nice number, and then it’s time for the experimental instrumental “Reflections of Time”. The album’s magnum opus is the long, last track “Listen to the Moths”. An earlier edit of this over nine-minute-long monster was previously released on split 7” on Regal Crabomophone (Fruits de Mer). This is a very unique song even for Octopus Syng being one of their darkest. The beginning is pretty minimal, more acoustic and fragile but quite strange and mystical. Before the three-minute-marker the track starts to move and you don’t know what hit you. The feeling this song gives you really is something else and hard to describe. Otherworldly, hypnotic, magical, a bit spooky are words that come to mind. There’s also some great solo guitar in there. This goes on for almost four minutes, and then there’s a highly psychedelic, experimental ambient ending with just some vintage effects, whispering and sparse percussion. Wow! This song is an instant psychedelia classic. I warmly recommend pre-ordering the very limited vinyl version from the Mega Dodo Bandcamp site right away, or get one of the just 100 copies of the CD with different cover art if you like. I know I need them both.