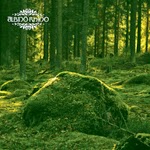 This is the second release by Helsinki-based stoner rock/doom group Albinö Rhino following last year’s mini-album Return of the Goddess on Russian Bad Road Cogito Ergo Sum label. I have really enjoyed this trio formed by Kimmo Tyni (guitar/vocals), Ville Harju (bass/vocals) and Viljami Väre (drums) ever since I first saw them live at Bar Lepakkomies in Helsinki, since their music is a nice mix of heavy doom, hypnotic repetition and psychedelic stoner rock with a progressive twist. The first release was more or less just four demo tracks remastered for a CD release and suffered from a little too muddy sound, but now the sound quality is a lot better, even if still a little home-grown. The whole album was produced, recorded and mixed by Kimmo at Dubsync Laboratory, Helsinki, except that drums were recorded by Jari Pörsti at Damn Jam Studio, Helsinki.

There are only four tracks on this album that’s out on CD and vinyl, but the tracks are pretty long… The groovy, instrumental opener “The Forest Prevails” has also been played live a lot and I like it very much. It’s pretty much based on just one mid-tempo stoner riff that gets developed and has more guitar and stuff like psychedelic effects build on it. This is good stuff to bang your head to! The slower “Sanctification” has Om-like vocals by Kimmo and a really cool, doomy and mesmerizing vibe. Some heavy guitar on this one, and we also get some faster jamming. Kimmo might not be the fastest or best solo guitarist in the world but I like the emotion and vibe he has in his playing, and the rhythm section does a great job as well. “Blue Mist” written and sung by Ville starts off with some more solo guitar and this is another great stoner doom piece that has some more melody, groove and jamming/soloing to keep things interesting. This might be the best track, although the last, over 14-minute “Uphold the Light Pt. 1” is amazing as well… This one has a bit more progressive, even Kingston Wall styled stuff and is far more lively than the other tracks. I’m also getting some The Obsessed vibes later on. What a great song and a very nice ending to this brilliant disc. Come and see Albinö Rhino support heavy doom monsters Conan tonight at Bar Loose, Helsinki!