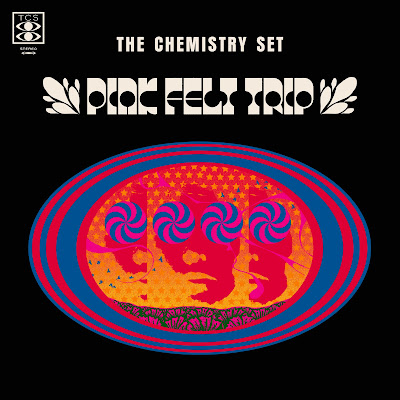 The Chemistry Set is a London based psych rock outfit formed by Dave Mclean and Paul Lake in 1987. They had a big part in making the late 80s UK neo-psychedelic moment what it was. Great thing these guys are still active and releasing superb new stuff on Fruits de Mer and Regal Crabomophone so regularly even in modern times. Pink Felt Trip is their latest and another winner for sure. According to the promo sheet, this is the band's 61st release, can you believe that? They have opted for a bit heavier sound on many of the tracks but there is still room for magnificent melodies and all kinds of trippy tricks and hooks.

There are nine tracks on the LP. The band has previously covered for example "Legend of a Mind" by The Moody Blues and "Silver Birch" by Del Shannon, and this time it was time to do a great version of "The Witch" by Mark Fry. It follows right after the heavy, short title song that opens the album and works really well with added Gregorian chant intro. Things get pretty heavy and psychy... The whimsical "Lovely Cup of Tea" was already released on a 7" EP in 2017. "Firefly" (previously released on 7" in 2018) is a great, mystical and heavier tune that I really enjoy and "Psychotronic Man" a lighter, atmospheric piece with acoustic guitars, tablas etc., really cool stuff. Also "Paint Me a Dream" was released on 7" before (2021), marvellous tune, read my review here. Also has "The Witch" on B side. "Sail Away" reminds me of Led Zeppelin a bit, acoustic guitars, slide guitar, tablas. This was the B side of "Firefly" single. "The Rubicon" is a catchy, simple pop psych song that we also had heard before on the "Lovely Cup of Tea" 7" EP. Even the hard core fans have 11 minutes of never-before-heard stuff at the end when the "Self Expression Trinity" blows your mind. This is an excellent trilogy with lots of different emotions and vibes. Mellotrons are always welcome addition... Some superb guitar solos in there too, for example. I also really like the vocals, as always. An amazing ending for a really great album! My only little complain here is that so many of the tracks were already released before on 7" singles/EP's so not completely new. Still, in this albun context they sound a bit different and definitely have their right to be included. One of the best album releases so far in 2022!