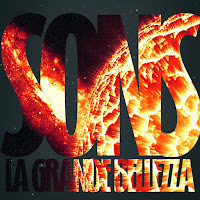 I've really been enjoying the two first albums by German neo-krautrock duo Sounds of New Soma. Their highly psychedelic, kosmische soundscapes never fail to get you into "the zone". SONS is formed by Tonzonen label boss Dirk Raupach (synthesizer/effects/vocals) and Alexander Djelassi (guitar/bass/synthesizer/effects/vocal) and on this third trip of theirs they are accompanied by guest musicians Armin Schopper (drums) and Andreas Lessenich (saxophone) to give the album some more texture and dimension.

The album starts off with the excellent "Bundesgartenschau '71" and the guest drummer really makes a difference here. This is a really hypnotic, enjoyable instrumental ride straight into the heart of the cosmos. I'm sure all fans of krautrock old and new will enjoy it. The shorter, experimental "Der Grüne Pilz" just has some effected narration in German and little bit of occasional drum sounds. Weird! "Einheit des Lichtes" is a ten-minute ambient sequencer journey in the vein of Tangerine Dream or Klaus Schulze, and on "Garten des Lichtes" the trip goes on but gets even more cosmic and far-out. Deep, trippy vibes! "Das Weiße Rausche" gets more experimental and even a bit scary. Starting off with some field-recordings that remain in the mix "Spandau" is a jazzy, groovy and funky instrumental also including drums and sax. Very nice way to end the first album of this 2LP set!

"Wahn" is a very hypnotic, brain-melting piece with spacey guitar sounds, synths and sequencers as well as some cymbal and manipulated human voice. Strange and effective! On "Schwurbel" and "Schönheit" the vibe is more relaxed and laid-back, phew. The more motorik, monotonic krautrock style of the first track returns on the ten-minute "Wurmloch" that I like a lot too. The album is finished with the beuatiful and melencholic "Duftnote" in a very pleasant manner. Some of the SONS stuff reminds me a bit of another superb neo-kraut act Electic Orange but they still definitely have a sound and style of their own. All in all, this is a marvellous 78-minute set of cosmic, mostly ambient and trippy soundscapes that you really should listen to if you want to chill out and escpace to a whole different universe for a while. The album is available on limited CD (300 copies) and two different 2LP editions both in brilliant gatefold cover. The special 2LP edition also comes with an extra sprayed cover that includes signed inlay, very cool 12-page booklet, poster and download code. Warmly recommeded!