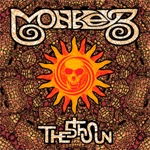 Monkey3 is a fabulous instrumental psychedelic/stoner/post-rock band from Switzerland who have been around for over ten years and released five albums. The 5th Sun was released in October last year and is probably their best and most accomplished work so far. Their adventurous music has elements of hypnotic space/kraut rock, it’s progressive and sometimes very beautiful and atmospheric, sometimes heavy and metallic. They also use lots of keyboards and synths to give the music more layers which is great. The new album has gained very positive reviews all over the world and I can see why.

The new album has six tracks, although the 2LP and limited digipak CD versions also have one bonus track “The Ship”. Things start with the majestic and powerful mid-tempo 15-minute piece “Icarus”. It starts to rock harder after the six-minute-marker, but then cools down for a few moments. The end is beautiful and atmospheric stuff, very nice. “Suns” begins gently with droney soundscapes, sparse electric piano and hypnotic, monotonic beat. The track grows after three minutes and you just can’t stop banging your head to the heavy motorik riff! In the end things mellow out again. Wonderful! “Birth of Venus” is a shorter, heavy and progressive piece, but there’s also some more atmospheric stuff in the middle. “Pintao” is the shortest track at 4:44 and it has a pretty weird, dark and experimental vibe. There’s a great guitar and keyboard solos in the end! “Once We Were” is a fast and furious heavy prog rock piece that I enjoy very much. The sort of Oriental vibe reminds me of Kingston Wall a bit. The slow, deep and mystical ending is very mesmerizing! The last track “Circles” starts off slowly and quietly, but starts to rock out in the heavy progressive way later on. There are also some Pink Floyd influences on the chord progression at times, I think. Great stuff anyway! For fans of My Sleeping Karma, Hypnos 69, Karma to Burn, Glowsun, Sungrazer etc.