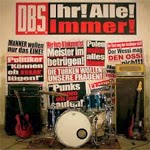 This stoner punk band from Berlin used to be called Drive By Shooting but they have shortened their name to DxBxSx, it seems. I have stumbled upon the band a couple of times, mostly because of the of some split releases on Swamp Room Records and Nasoni. The guys also saved my friend’s bag he forgot to the Nasoni 10 Years Festival in 2005 so they must be cool guys… Thanks! Their music just isn’t that interesting to me (sorry!). It’s pretty straight-forward punk rock with a bit heavier sound than usually in that genre. The vocals are now in German which suits the music just well. I just don’t understand them, but they seem to be quite political and anarchistic with a good old rock’n’roll party attitude. This kind of stuff kicks ass live when you’ve had a few beers, but I really don’t have a lot of interest to listen to this CD at home. The CD includes 14 tracks, and “Action Moni” sounds exactly like “Wild Thing” but with new lyrics in German. There’s nothing psychedelic here, and apart from the occasional MC5/Stooges/etc. vibes and the little bit groovier track “Sie Werden Sagen” this is too standard punk for me. Having said that, the band rocks out and plays very tightly so I’m sure there will be a lot of people who appreciate this kind of music. It should be great to party to. It’s just not for me.