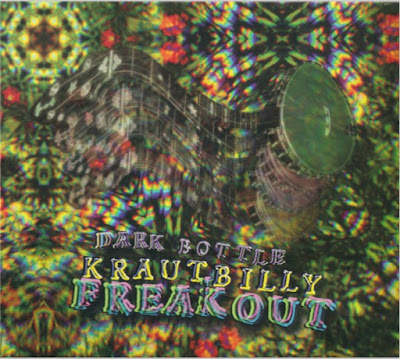 Krautbilly Freakout is the latest album by Tampere based punk-folk/psych-country and doombilly band Dark Bottle. You might remember my review of their debut Five Euro Pizza picture LP looking just like a pizza I reviewed five years ago. The band has (luckily) gone into a bit more psychedelic and darker, harder direction. This CD album includes just four long tracks and our old friend Scott "Dr. Space" Heller plays modular synths on two of them.

The slow, moody and dark Irish traditional "Molly Malone" starts off the album in an almost doomy atmospheres. Heavy stuff with a droney ending! Then it's time for an original sung in German. "Die Bibliothek von Babel" is a nice folk song and Scott's windy synths add a cool spacey layer. I really like the vocals on this one. The track was originally recorded by Don's old experimental post-folk duo The Fractal Cauliflowers. "The Sun only Shines when I Leave" rocks out more and has funny lyrics based on truth about Don's work trips. Cool guitar solo! "Make Finland Rake Again" is the fastest song and and makes you want to have a beer or ten and boogie along. Spacey synth makes it a bit like space rock which is cool! Definitely the most psychedelic track here and my favourite. All in all, this is a nice and cool little album worth checking out if you want to hear something a bit different.