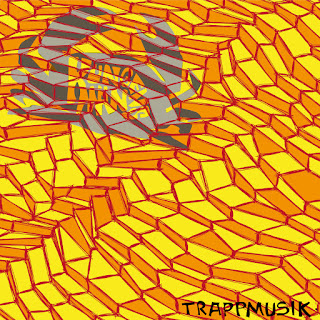 Kungens Män from Sweden have been busy! After releasing two new studio albums last year on Riot Season they have just put out a marvellous DOUBLE vinyl album on Adansonia Records! Like the previous outing Hårt Som Ben Trappmusik was recorded at the legendary Silence Studio in the middle of the ancient, magical and vast forests of Värmland. As always, the instrumental music is totally improvised on the spot. With six musicians they have created a bit eerie, hypnotic but adventurous, experimental and psychedelic sonic universe. The mostly contemplative album is varied enough to keep the listener interested for the whole trip and especially the saxophone adds a pretty jazzy vibe to some of the pieces.

There are seven jams on the album, ranging from five to almost 18 minutes in length. "Fånge i universum" starts off the journey with at first tranquil, spiritual and jazzy jamming that grows on its way to the stars until cooling down in the end. Excellent! The sort of weird "Senvägen" utilises basic drum machine beat and puts you in a trance. "Tricksen för transen" comes handy at this point... This one gets a bit heavier on the guitars which is great. Later on the track has a rather tribal, mystical feel to it. With it's organ and melodic guitar work "Främmande i tillvaron" sounds a bit more traditionally Swedish reminding me of some of the slower, atmospheric tracks by Goat and some other, also older Swedish acts. Wonderful! "Vibbdirektivet" is 15 minutes of celestial, echoed and peaceful soundscapes, very blissful indeed. On the five-minute "Lastkajen" the band gets a bit more experimental again, some early krautrock vibes here perhaps? The album is finished with the massive title track "Trappmusik" where we get some more jazzy sax again. In the middle the track starts to rock out a little too but nothing gets too out of hand. All in all, I must say that Trappmusic is perhaps the best album by Kungens Män. It's good to hear them constantly mutating and experimenting without loosing their essence. Make sure you get this album if you are a fan of instrumental psych jams! There are only 500 copies (two different editions) of this on vinyl so good luck finding a copy.