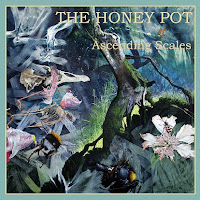 Fruits de Mer Records with their sister labels have been very productive  since their inception in 2008. What would be a better way to celebrate the 100th release on the label than to make excellent psychedelic musicians to record a great double LP with original and classic tunes and inviting lots of friends of the fish to join the mind-altering ride as guests! This is exactly what happened and the result will see the light of day next month with Ascending Scales, one of the best albums in 2016.

The Honey Pot is an U.K based psych rock/folk band featuring FdM / Mega Dodo heroes Icarus Peel and Crystal Jacqueline, who are very capable of creating marvellous music by themselves. On this album their band is joined by many famous musicians like Dick Taylor (The Pretty Things), James Lowe (The Electric Prunes), Tom Newman and Peter Cook (July), Tony Durant (Fuchsia), Nick Saloman and Adrian Shaw (The Bevis Frond) as well as lots of little more underground and modern artists that have been connected to Fruits de Mer. Even 12 of the 14 tracks on this 80-minute album have at least one guest musician on it!

Right away from the opener "1969" starting off with a small spoken piece by James Lowe it's clear that this album is a winner. "Solomon Deep" sounds a bit like Bo Diddley's "Who Do You Love?", so Dick Taylor's great guitar solo fits like a glove. "Love Is Green" with Jack Ellister on guitars is a beautiful, folky tune. Anton Barbeau's vocals are perfect for the rather cheery and up-beat psych pop piece "Dr. Crippen's Waiting Room", originally by Orange Machine. One of my faves on this album! The spooky "Can't You See the Witch" (The Ruttles) rocks out great with synths by Cary Grace, another highlight on the first album. The July guys are a great match to the mellow, a bit bluesy "Half a Memory", a new song written for this album. Then it's time for some folk vibes again with the Pretty Things classic "Sitting Alone". Wonderful female vocals (four different ones) on this one! The seven-minute "I've Been So Tired" is one of the most psychedelic and experimental tracks and originally from Mordecai Smyth's first album. There's also some sax by Tabatha Smyth and very psyched-out solo guitar work. Very nice!

The second slap of vinyl starts off with "Time Machine" by Stray. Ade Shaw is playing bass and Nick Saloman does the wonderful guitar solo when the track really starts to rock out. I can never get enough of his guitar! "Lucky Spaceman" has Curvey from The Luck of Eden Hall on vocals and guitar and I like it a lot. "Rainy Day Mushroom Pillow" (Strawberry Alarm Clock) gets a very special and atmopsheric treatment with Steve Palmer from Mooch playing some exotic whistles and pipes from his large ethnic instrument collection. "America" is a tune we all are familiar with, but it still sounds somehow fresh in here. Then it's time for a The Honey Pot original "Into the Deep" and it sure is a great track as well. I love there spacey sounds and theremin and the guest on this one is Bruce Woolley (from Buggles). Tony Durant from Fuchsia is saved for the last and "River Runs By" joint written by Icarus Peel and Tony for this release is a wonderful, peaceful way to end the trip. There are no fillers on the album, so 80 minutes go by in a lovely haze and wonder. The mix of old and new songs and inclusion of so many superb guests makes this a very interesting and enjoyable experience. Just get this marvelloous album!