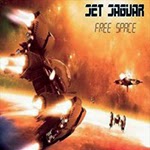 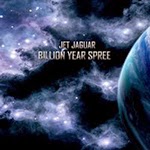 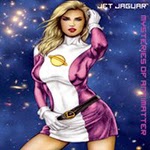 Jet Jaguar, who took their name form the Godzilla movie, is a US based space rock band deeply inspired and influenced by science fiction, Hawkwind/Robert Calvert and Chrome/Helios Creed. With those obsessions and lots of imagination and talent of their own it's impossible to go wrong and I must say I really like this band! Free Space and Billion Year Spree are their first two albums originally released over ten years ago, and Mysteries of Antimatter is a brand-new one after a long hiatus or, in this case, deep-freeze might be a more suitable expression. All their albums have only been self-released on CD apart from Space Anthem, a collection of live tracks from 2004 and studio outtakes over a period from 2002 to 2004, that was also released on 2LP by Black Widow.

I have reviewed the first two albums when they originally were put out, so I won't go into detail now. Both Free Base and Billion Year Spree have been remastered and revisualized and sound a lot better than before. Track titles like "Brain Stun", "She's an Alien", "Beam Me to Mars", "The Scanner", "Future Martyr on Supersonic Waves", "The Last Kings of Space", & "Chrononaut" might give you a good insight of what's going on. The main themes are robotics, nuclear, holocaust, cloning, cryogenics, information overload, artificial intelligence as so on. There are heavy, energetic, acid punky, pounding and even catchy rock songs with lots of phaser & other effects as well as more ambient, synthesizer-driven pieces. The vocals are often heavily manipulated in the Chrome style. For some reason, two tracks from Free Base have been dropped, namely "Squids in the Matrix" and the Hawkwind cover "Orgone Accumulator", but there are still 12 songs left so no problem. The tracks have also been placed in a bit different order, but the main feel of the album is almost the same, I think. The track list on Billion Year Spree has been edited a bit as well, three songs have been left out and two new ones been added at the end (the short space ambient "Chrononaut" and an excellent cover of Hawkwind's "Lord of Light". Great stuff, get it now if you missed out in the first place! Also available as downloads.

Mysteries of Antimatter comes with a sexy space lady cover and includes 13 new tracks and a cover of "Superior Catholic Finger" by the mighty Helios Creed. The album was mastered by Alisa Coral (get well soon Alisa!), and sounds superb. The band just takes on where they left six or seven years ago without any problems. Their heavy, energetic, robotic and mind-expanding sound has remained pretty much the same, as well as the sci-fi themes in the songs like "Planet of the Vampires", "Rocket Boy Meets Saturn Girl", "Starlost", "Workin' in the Asteroid Mines", "Invasion Mutation" and "Destroy All Planets". The overal vibe is perhaps even closer to Helios Creed and Chrome than before, twisted, heavy, rocking, spacey and weird. I love it! The songs are pretty short as always, all in the range of 1:40 to 5:21. I really like all the tracks, but my favourites at the moment might be the tight and fast "Stingray Eyes", more Hawkwindish "Starlost", "Invasion Mutation" and the slow and creepy "The Negative Ones". Highly recommended for all fans of Chrome and Helios Creed and heavy, acid punky and experimental space rock in general!