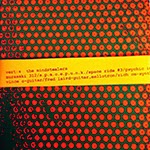 The Mindstealers is the brand-new album by UK space/kraut/psych rock outfit Vert:x run by Neil Whitehead (bass, guitar, vocals on this one). Fred Laird from Earthling Society is giving help on guitar, Mellotron and production, and Neil has also been helping him out on Earthling Society’s live gigs recently. Other musician on the CD (first actual CD they’ve put out) are Vince C (guitar) and Rich Om (synthesizer), so I guess the drums are programmed again but they still sound good and powerful. Friends of Fruits de Mer and its sister label know that Vert:x has appeared also on vinyl, and if you are into the UK festival scene you must have also heard off them.

The disc starts off with the heavy-pounding, almost 11-minute instrumental monster “Murasaki 312”. Especially the spacey synth swooshes and Huw-like, excellent lead guitar work remind me of 80s Hawkwind and I really don’t mind. This really rocks, amazing! “S.P.A.C.E.P.U.N.K.” continues along similar paths, but it is shorter and, well, more punky… “Space Ride #3” rocks hard as well and the listener is guided through a space journey for almost nine minutes. No vocals on this one either, but this is another killer track with great playing by everyone. The last two minutes are just atmospheric, experimental soundscapes. The shortest track on the CD is “Psychic Indicator” that sounds probably more like Chrome or Helios Creed than Hawkwind, but I of course have no problem with that! Fans of Farflung will for sure enjoy this powerful song that also has vocals and even a chorus. The album is finished with the massive “Planet of the Mindstealers” that goes on for over 26 minutes! This is mind-numbing, hypnotic and hard-rocking space blanga at its best. This will fry your brain for sure… I love it! I really hope this album could also be released on vinyl, but in the mean time you can get the CD directly from the band and it will soon be available on Amazon and iTunes through Sheepdog Records.