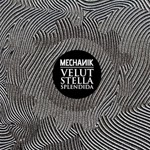 I’ve been a fan of this psychedelic and experimental kraut/space/trance rock band from Madrid, Spain, since I first heard their second demo EP Inner Temple / Outer Temple in 2012. Velut Stella Splendida demo EP came later that same year, and surprise: in 2013 they were involved with my favourite record label Fruits de Mer with 25 minutes of greatness on their Strange Fish vinyl album series. Later last year they also released their debut full-length on Russian R.A.I.G. label and I got to say this is their best stuff yet. This band has a lot of elements I love: hypnotic, tight grooves, heavy guitar, psychedelic guitar, floating guitar, spacey synthesizer sounds, jamming, chaotic noise parts and also some mind-expanding vocals. There are some similarities with bands like Mugstar, Kinski, Korai Öröm, Seven That Spells and Acid Mothers Temple, just to name a few.

The CD is pretty long at 76 minutes, but I got to say that I’m never bored listening to it. There are nine tracks (from just under fiver to close to 23 minutes in length), and some of them are new, updated versions of previously recorded ones. The opener “Wherever You Are Is the Entry Point” starts of slowly as a quiet drone, but after two minutes a hypnotic, monotonic kraut groove materializes. This instrumental gets heavier and more powerful until it fades out in the end. “In the Faith That Looks through Death” has a nice groovy drum beat, repetitive bass line, excellent heavy guitar licks in the vein of Robert Fripp, Syd Barrett styled vocals and lots of space sounds. In the end the song goes really psychedelic and takes you into another world. Superb! “Pills” is an old song but this version rocks out even more and has some AMT influences in the slower, heavy parts. On “De Tepenecz” the band calms down for a while in spacey ambient sounds bringing to mind the trilogy era Gong. A steady beat and almost whispered vocals rise from the ambient pool but this track stays pretty hazy and floating. Great! One of my favourites is “Zum Traum” that sounds a bit like Kinski on their most spaced out moments but also has some 60s psych rock vibes. There’s also some nice lead guitar in the end and the bass player gets wild too. As the title suggests, “Bliss & Gloss” is a long, slow and blissful space jam bringing back memories from the early German kraut pioneers high on acid. Also “Russian Doll” begins in a very tranquil mode with even some acoustic guitar. Then we get soft vocals, and the track starts to build up. The vibe here is somehow different to the rest of the album but I still like it. “Inner Temple” is another rehashed old track and an absolute mind-blower. Here the band elevates to another level, I would love to see this happening live! Finally, the 22:47 long “Most People Were Silent” will destroy the rest of your brain cells but in an evocative, pleasant way. This is perhaps closer to post-rock, but I like it too. What a great album!