We are very happy that we will have Germany's number 1 psychedelic acid rock band Vibravoid to play at our club at Bar Loose, Helsinki. They will be supported by the great, cosmic and electronic band E-Musikgruppe Lux Ohr, who just released their first official studio album on Svart Records.

Here's the flyer for the gig: 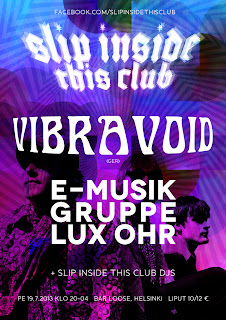 Vibravoid will also play two other gigs in Finland. On 18.7. they will play at Varjobaari, Tampere, and on 20.7. at ILMIÖ Festival in Turku.